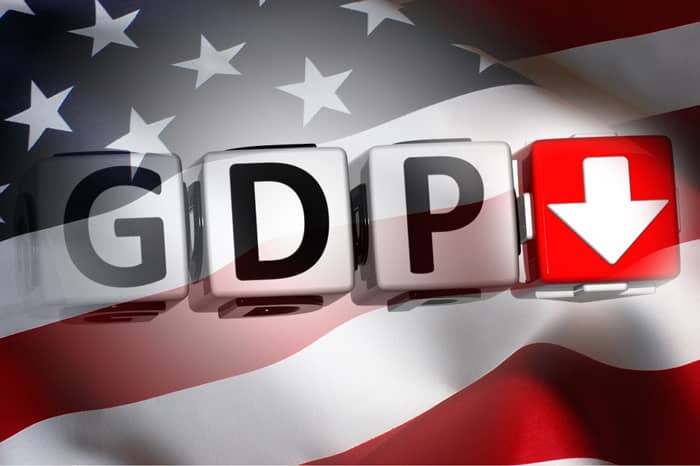 The U.S second-quarter gross domestic product (GDP) shrinks at a record 32.9% on an annualized basis.  The April from June decline is the sharpest contraction in modern American history.

Personal consumption, net exports, investment, and spending by state and local governments and inventories are components of GDP.

Despite massive fiscal and monetary stimulus, all those components were down in the second quarter.  For example, consumer spending or personal consumption, which accounts for about 66% of GDP, fell 34.6 percent.

American Families on the Edge

The U.S. weekly jobless claims were nearly 1.5 million last week, and about 30 million Americans continue receiving some sort of unemployment benefits.  Consumers are not spending like they used to before COVID-19.

They are uncertain about what will happen next.  Businesses started opening back up in the last month of Q2, but a resurgence of the virus is forcing companies to shut down again.

There was one silver lining from the nightmarish economic data that the government reported.  Disposable personal income, which is the amount that consumers have left to spend or save after paying taxes, did go up by nearly 42 percent.

Government transfer payments could be credited for that increase.  The Cares Act sent direct payments to Americans and provided an additional $600 each week to the unemployed.

The additional unemployment insurance is due to expire on July 31.  The Republicans are willing to extend it, but they want to slash it from $600 to $200 each week.

Both Democrats and Republicans agree that there is still a great need for more fiscal stimulus, but they are at odds over the appropriate amount and what programs to spend it on.

So far, the Federal Reserve already lent $3.5 trillion to corporations, financial firms, and state and local governments to support the U.S. economy.  The Fed vowed to use all its tools to support the recovery.

The economy is going to need both strategic fiscal spending from Congress and smart monetary policies from the Fed to avoid it from going over a cliff.