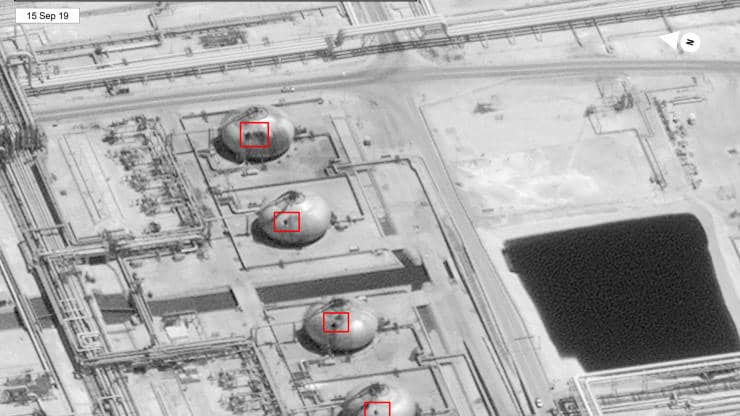 The estimated reading time for this post is 180 seconds

Who conducted the attack on the Saudi’s Oil facilities on Sunday night is still not clear, but there are many more developments since we wrote about in this site on Monday?  Here’s a timeline of what we know so far about the Saudi oil attacks:

Drone attacks on massive and small oil facilities in Saudi Arabia. The attack removed roughly 5 percent of global supplies. Why and who conducted the strikes are unclear for now.

Houthi militia in Yemen claimed responsibility right after the attacks, but President Trump believed that Iran conducted the attack and denied the Houthi’s claim.  He tweeted on Sunday night that, “The U.S. Locked and Loaded.”

Satellite images from the massive facility started emerging. The images showed that the facilities were hit with a combination of Drone and missiles. It was still unclear who did it, but Washington and Riyad (Saudi Arabia’s Capital) was more convincing that Iran conducted the attacks.  However, Iran denied any wrongdoing.  President Trump took a step from his Sunday night “Locked and Loaded” tweet and stated that he would like to avoid war with Iran.

The U.S. Defense Department claimed on Tuesday that it has satellite images of Iran getting drones and missiles ready. Although it’s still unclear whether or not those drones and missiles were used in the Saudi Attacks, the Defense Department sees the activities as circumstantial evidence that Iran launched the strike in Saudi Arabia.  U.S. Secretary of State Mike Pompeo is on his way to Saudi Arabia to formulate a response with the Kingdom.

Saudi Arabia presented drone and missiles debris, which it says how oil attacks “unquestionably” sponsored by Iran.” Secretary Mike Pompeo stated that Iran carried out an “act of war.”

Ever since his “U.S. Locked and Loaded” response, President Trump sounds noncommittal while his Secretary of State Mike Pompeo being more hawkish.

The 2015 brokered deal, Iran agreed to cut back on its nuclear activities and would allow third-party inspectors in return for relief on economic sanctions.

President Trump did not like that deal as a citizen and candidate.  Shortly, after he took office, he withdrew from the agreement and placed more severe economic sanctions back on Iran.

The new economic sanctions are hurting the Iranian economic, mostly its oil export. So, Iran attacking Saudi Arabia, which is the U.S. biggest ally in the region, oil facilities should not be surprising to anyone.  However, the evidence is still unclear.

Saudi Arabia presented drone and missiles debris on Wednesday stated that the oil attacks were “unquestionably” sponsored by Iran.” In response to Mike Pompeo, Iranian Foreign Minister Mohammad Javad Zarif tweeted that, “Iran has no desire for war, but we will, and always have, defend our people and our nation.”

The number one concern for the American Middle-Class is oil prices.  They will most likely surge in the next two weeks.   The main concern for the world; however, is how President Trump decides to retaliate if it turns out that Iran didn’t just sponsor the attacks, they orchestrated them.  Because of President Trump ‘s instable relationship with the staunchest U.S. allies, a consensus response to Iran aggression will be complicated.