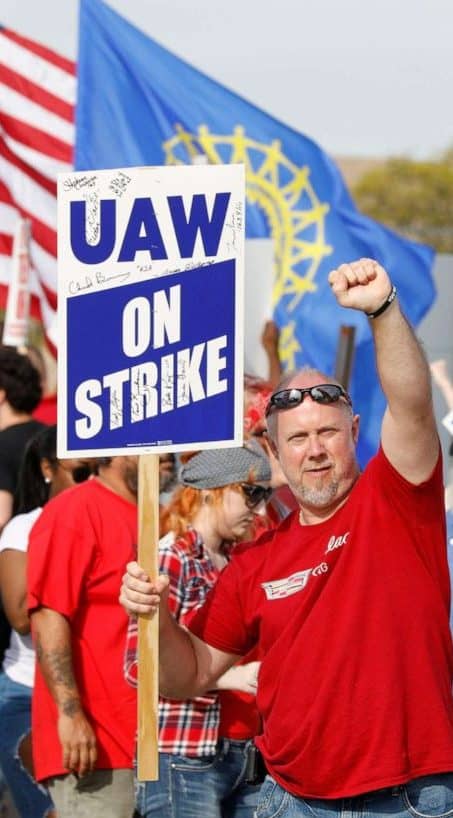 The estimated reading time for this post is 89 seconds

The American middle-class has nearly 50,000 new heroes to pay homage and commemorate.  Those new heroes are the auto workers, all across the country, who have been on strike since September 16. Thirteen days later, they are still on the picket lines.

They are employees from General Motors (GM), who are part of the United Auto Workers Union.  They worked off the job after contract negotiations fell apart on September 15.

Over the past three decades, corporations’ profits have increased many-folds. However, the windfall has not been shared with workers. Real wages have gone up slightly for most American workers.

Corporations have been using automation, globalization, and technology to reduce their need for human capital.  Workers, across industries, have been left to believe that they are lucky to have a job—any job.

The 50,000 auto workers, who are still on strike 13 days later, are showing all workers that they still have power in the workforce if they unite and unionize.  American workers have been voting against unions because lobbied politicians told them that unions are bad for capitalism and they could lose their job if they kept supporting them.

The popular morning show Breakfast Club Host, Charlamagne Tha God asked 2020 presidential candidate Andrew Yang, “why can’t we stop making the robots if they will end up taking our jobs?”  All American workers don’t need to become Luddite and fight back against technology. What they need to do is mobilize collectively against big corporations.

This is why the 50,000 auto workers are our newly-minted heroes. They are collectively mobilizing against big corporations. One of their demands is to turn temporary workers into full-time employees.  Demanding fair wages and affordable healthcare are tremendous and worthy fights.  All American should respect and stand with those auto workers, especially the middle class.

A Case for Mandatory Personal Finance Education in Public Schools

The estimated reading time for this post is 464 seconds In America, there is a massive knowledge gap America when it comes to personal finance. This article will explore the current state of financial education in America and propose a...