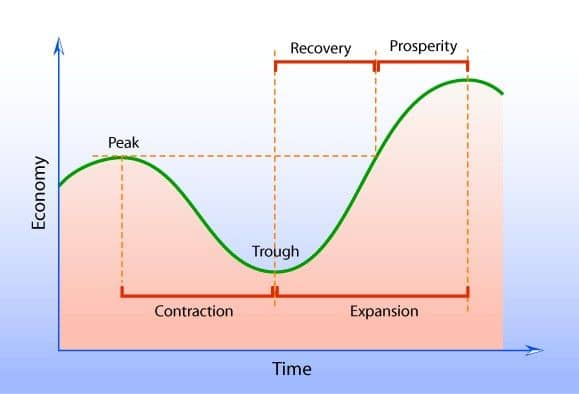 The estimated reading time for this post is 162 seconds

The return of business cycles is upon us as the longest U.S. economic expansion in history has ended. The rapid decline in employment and production, due to the coronavirus pandemic, accelerated the economy into a recession.

The decade-plus economic expansion, the longest in post-World War II history, gave us the sense that the normal downward and upward movement of gross domestic product was a thing in the past.  Numerous economists believed that continual economic growth could be a new normal.  Before Covid-19, most economic data supported those economists’ beliefs.

U.S. GDP fell 5 percent in the first quarter, and the National Bureau of Economic Research (NBER) said that the economy has been in a recession since February.  The unemployment rate, which had been at a 50-year low, soared to 14.7% in April, its worst in post-World War II history.

Labor experts were expecting the unemployment rate to jump to as high as 25 percent in May, but the Bureau of Labor Statistics reported last Friday that the workforce added 2.5 million jobs, and the rate was 13.3% in May.

The coronavirus pandemic and the public health response that followed it forced 95% of the U.S. Economy to be put into shutdown and a majority of Americans to shelter in place.  So, this recession is not your normal economic contraction.

Business cycles are part and parcels of an open economy. Cheap credit, 128-month economic expansion, and low inflation tricked us into believing that the U.S. economy would reach its peak and maintain its “permanent plateau.”

Factoring global pandemics, geopolitical risks, and other externalities into economic forecasts is a tall order, but it’s something that macroeconomists must try to do going forward.

Businesses, especially small and medium-sized that believed in the eradication of the business cycles or permanent plateau, were not prepared for a recession.  Millions of companies are not going to survive this unexpected recession, and millions of workers who have been furloughed could lose their job.

What Type of Economic Recovery Can We Expect?

This current recession is abnormal; it’s a pandemic induced recession; therefore, economists expect a similar recovery or a V-shaped recovery.  Covid-19 accelerated the decline, and experts believe that once the virus is contained, the economy will experience a sharp rise back to the previous peak.

The economy added 2.5 million jobs in May, and the unemployment rate was at 13.50, which is hugely below the 20 to 25 percent that numerous labor experts forecasted. May’s employment number and rate show that the economy could head for a V-shape recovery, but we would have to wait for employment numbers for the next few months to know for sure.

Since the Great Recession, the Federal Reserve has done the best they could to abolish the business cycles.  The Fed maintained a low benchmark interest rate even when the economy was close to full employment, continued increasing its bond holding to facilitate the flow of credit, and bought other financial assets the moment private investors started abandoning certain asset classes.

Although epidemiologists have been warning us about a global pandemic for years, covid-19 is a black swan moment for the global economy.  Monetary and fiscal policies might facilitate a V-shape recovery, but don’t go and bet the barn on it.