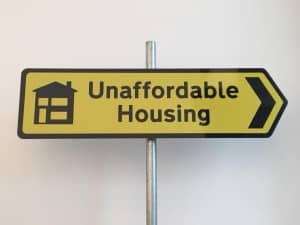 The estimated reading time for this post is 185 seconds

A decade-plus into the current economic expansion, the housing market, in most cities, has reached its pre-crisis peak, which presents many severe challenges for those who want to enter or re-enter the housing market.

Here are 10 challenges facing middle-income Americans and how to overcome them:

According to Zillow, the median price of homes currently listed in the United States is $289,000 compared to $148,000 in January 2012.  The median listing price in San Francisco and Miami are $1.3 million and $475,000, respectively. Although the interest rate on a 30-years fixed mortgage is at 3.50 percent, it is difficult for the middle-class buyers to get approved for such a large amount.

Auto loan default is putting stress on credit scores.  According to Experian, a record number of Americans are three months behind on their car payments.  The Federal Housing Administration (FHA) requires a minimum credit score of 580 and a 3.5 percent down payment for them to guarantee any loans issued by banks, credit unions, and online lenders.  Keep in mind credit scores that low will make the loan more expensive.

The overuse real estate adage, location, location, and location reigns true here.  According to Zillow, the median price of homes currently listed in Lubbock, Texas, is $189,950 compared to $475,000 in Miami, FL.   Because of an uneven economic recovery, people have to move where the jobs are. And where the jobs are in urban areas such as San Francisco, Miami, and New York.

Gentrification is defined as a process of changing the character of a neighborhood through the influx of more affluent residents and businesses.  An uneven economic recovery pushes more and more urban neighborhoods to be gentrified.

There is a severe shortage of housing inventory; developers are not building as many starter homes as needed.  They prefer building luxury homes because they make more money off them.

Student and other Debts

The Average American has roughly $38,000 in student loan debt. When factoring credit cards, auto loans, and personal debts, the typical middle-class American is already highly leveraged way before they think about buying a home.  A high debt-to-income ratio is one of the main reasons many mortgage applications get denied.

Upper-middle-class Americans have been using zoning laws effectively to prevent developers from building low-income and starter homes in their suburbia—all in the name of protecting their home values.

According to Bloomberg, real estate investment trusts, private-equity firms, and hedge funds have spent at least $25 billion purchasing houses since 2012.  They converted the properties into single-family rentals, which exacerbate the availability problem mentioned above.

Before the housing crisis, local, state, and federal governments used to incentivize the middle class to buy houses. Almost all those incentives went away; they need to come back with better oversight.

The housing challenges facing middle-class Americans are real.  Something has to be done before it becomes a full-blown crisis.