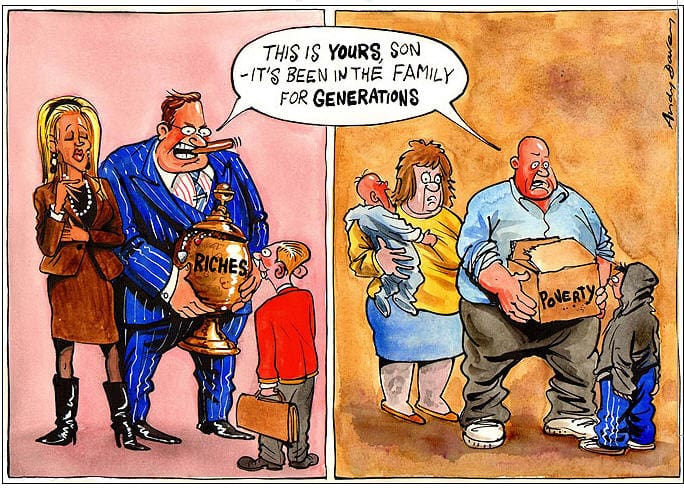 The estimated reading time for this post is 202 seconds

According to a report from the Organization for Economic Co-operation and Development (OECD), it could take 150 years for a child from a poor UK family to earn the average national income.   That child has two options: find a way to increase her life expectancy or move to one of the 8 best countries for social mobility.

Economic mobility across generations might be stagnated, declined, or both in rich countries like the UK, but there are many countries where children are having a better living standard than their parents.   Here’s the list of the 8 best countries for social mobility:

This Nordic state ranks first on the list because of its universal preschool, free college tuition,  and income assistance.  Higher taxes and income transfers give the nation a higher mobility rate compared to other rich countries.  The Nordic country has a population of nearly 5.8 million people.  Immigrants make up 8 percent of its people.  Implementing democratic social programs is less complicated in a country that size.

Sweden might be the most egalitarian country on this list, and it has excellent social mobility.  Democratic social programs such as paid sick and maternity leave allow women to participate in the labor forcefully.  Sweden, many other social programs, facilitate mobility upward to many Swedes.

People across the world saw the resiliency of this South-American country when 33 miners trapped 2,300 feet underground and 3 miles from the mine’s entrance and were rescued 69 days later.  According to a World Report, Economic and the Rise of the Latin American Middle Class, 60 percent of the Chilean population increased their economic situation between 1992 and 2009 and 40 percent of them maintained their economic status within that same period.

By 2021, New Zealand will have one of the highest minimum wages in the world, at $20 per hour.  Someone who is working a regular 40-hour week will have a pre-tax income of $800.  The minimum wage now is at $17.70.   Having a decent living wage is what put New Zealand on the list.  Of course, addressing income and wealth inequalities is paramount for every nation, but a market-based minimum salary is an excellent way to reward those who want to work hard.

America might not be the “shining city on the hill” anymore by many standards, but it has a higher mobility rate compared to other rich countries.  Of course, “rags to riches” stories are becoming a scarcity in the United States, but social mobility is still possible.  Globalization, Technology, and immigrants keep America competitive.    Universal preschool program and education and zoning laws reforms are things America can do now to make the American Dream attainable to all its 330 million citizens.

For about two decades now, the American Dream has been referred to as the Canadian Dream. The neighboring country has a level of social mobility both within and across generations.  According to research conducted by the Canadian Association for Business Economics, nearly 9 out of 10 Canadians who started in the bottom 20 percent had moved out of the low-income.

Nearly seven decades after the Miracle on the Ham River, which is the period of rapid economic growth in South Korea following the Korean War, the economic engine of South Korea is still humming.   South Korea has a higher mobility rate compared to other rich countries. Although education is what upsetting income inequality, many young South Koreans believe that ambition and talent will not get them moved up to the next rung on the economic ladder.  The government will have to find ways to curtail the spread of the “Spoon Theory,” which is flagrant nepotism that is corrupting the South Korean’s economy.

Although it is the second-most populous country, with nearly 130 million people, in North America, Mexico is often seen more as pinata than a dynamic state.  According to an article from the Council on Foreign Relations ‘s website, there is a significant amount of mobility in Mexico’s middle three economic quartiles.  Mexicans are making their way up to the middle-class by the thousands every year.

*This cartoon by Andy Davey