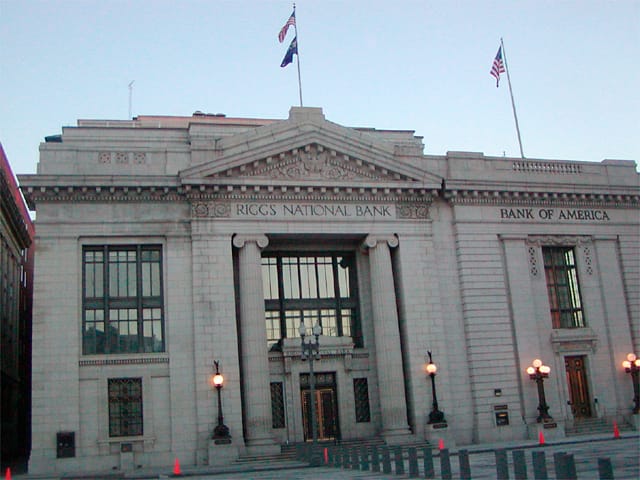 The estimated reading time for this post is 126 seconds

When people dwell on the enormous scope of finance, crime certainly does pay. In fact, over the years, various individuals and groups have committed some of the most significant financial crimes in history.

From bank frauds, stock market manipulations, and Ponzi schemes to insider trading and money laundering, these criminals have stolen billions of dollars from unsuspecting victims.

Headquartered in Washington D.C., Riggs Bank was instrumental in the economic function of America. U.S. presidents, diplomats, and legislators had the banks handling their financial affairs.

As the above screenshot showed, the bank headquarter office was down the street from the White House, located at 1600 Pennsylvania Avenue. For 186 years, the bank helped finance the Mexican-American War, Samuel Morse’s telegraph invention, and more.

Mergers and acquisitions facilitated Riggs Bank’s growth. By 2004 it grew to be the largest bank in District Columbia with more than $6 billion and more than 1,307 employees.

The bank’s executives explained the decline in net interest income. They stated, “the three years ended December 31, 2004, were generally a period of historically low-interest rates during which it became increasingly difficult to adjust the pricing of funding sources as rapidly as earning assets” as the reason for the nearly 13% drop in net interest income for that year.

It stated, “In 2004, Riggs experienced a significant level of negative attention related to its international operations, regulatory compliance, and other matters. This resulted in a significant increase in the level of reputation risk.”

Many money laundering allegations have been leveled against the bank, including going to great lengths to facilitate former Chilean dictator Augusto Pinochet’s hiding of assets after his accounts were frozen and inadvertently allowing September 11 attackers to move money due to lack of monitoring.

Washingtonians still remember the iconic bank that was so instrumental in their district. The Riggs Bank Building in 1503 Pennsylvania Avenue is now a luxury hotel.

The estimated reading time for this post is 274 seconds Biggest Financial Crimes: Countrywide Financial Corporation The opacity of the financial industry and complex business operations allow certain groups of organizations, financial and non-financial institutions, and individuals to profit from...

The estimated reading time for this post is 179 seconds Biggest Financial Crimes: Tyco International When people dwell on the enormous scope of finance, crime certainly does pay. In fact, over the years, various individuals and groups have committed some...